Recommended books (17)
Travel the world without leaving your chair. The target of the Read Around The World Challenge is to read at least one book written by an author from each and every country in the world. All books that are listed here as part of the Read Around Asia Challenge were written by authors from India. Find a great book for the next part of your reading journey around the world from this book list. The following popular books have been recommended so far.

India
Description:
"A novel set in India during the Emergency, by the author of Such a Long Journey."
Genre
Tags: Male author
Recommended: 17 May 2018

India
Description:
"When Saroo Brierley used Google Earth to find his long-lost home town half a world away, he made global headlines. Saroo had become lost on a train in India at the age of five. Not knowing the name of his family or where he was from, he survived for weeks on the streets of Kolkata, before being taken into an orphanage and adopted by a couple in Australia. Despite being happy in his new family, Saroo always wondered about his origins. He spent hours staring at the map of India on his bedroom wall. When he was a young man the advent of Google Earth led him to pour over satellite images of the c... continue
Genre
Tags: Male author
Recommended: 25 May 2022

India
Description:
Vikram Seth's novel is, at its core, a love story: Lata and her mother, Mrs. Rupa Mehra, are both trying to find -- through love or through exacting maternal appraisal -- a suitable boy for Lata to marry. Set in the early 1950s, in an India newly independent and struggling through a time of crisis, A Suitable Boy takes us into the richly imagined world of four large extended families and spins a compulsively readable tale of their lives and loves. A sweeping panoramic portrait of a complex, multiethnic society in flux, A Suitable Boy remains the story of ordinary people caught up in a web of l... continue
Genre Historical Romance
Tags: Male author
Recommended: 21 May 2022 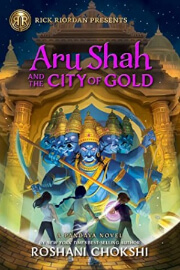 Aru Shah and the City of Gold by Roshani Chokshi EN

Haroun and the Sea of Stories by Salman Rushdie EN

India
Description:
It all begins with a letter. Fall in love with Penguin Drop Caps, a new series of twenty-six collectible and hardcover editions, each with a type cover showcasing a gorgeously illustrated letter of the alphabet. In a design collaboration between Jessica Hische and Penguin Art Director Paul Buckley, the series features unique cover art by Hische, a superstar in the world of type design and illustration, whose work has appeared everywhere from Tiffany & Co. to Wes Anderson's recent film Moonrise Kingdom to Penguin's own bestsellers Committed and Rules of Civility. With exclusive designs that hav... continue
Genre Fantasy
Tags: Male author
Recommended: 01 Jul 2022

India
Description:
'Samira has created a chilling, powerful, all-too-real near future that's a must-read for everyone's TBR' Karen M. McManus, author of One Of Us Is Lying 'A must-read . . . A heart-rending and all-too credible tale of sacrifice, the ugly face of authority and the courage of youth' Sunday Times' Children's Book of the Month 'A tremendous novel' the Guardian Rebellions are built on hope. Set in a horrifying 'fifteen minutes in the future' United States, seventeen-year-old Layla Amin is forced into an internment camp for Muslim-Americans along with her parents. With the help of newly-made friends ... continue
Genre Dyspotia
Tags: Set in UNITED STATES OF AMERICA Female author
Recommended: 11 Sep 2022

Q and A by Vikas Swarup EN

India
Description:
Arrested for unbelievably answering all twelve questions on the Indian game show "Who Will Win a Billion?" semi-literate waiter Ram Mohammad Thomas explains to his lawyer how he knew the answer to each question due to events in his personal life, from a past meeting with a zealous Australian army colonel to his tour guide job at the Taj Mahal. A first novel. Reprint. 25,000 first printing.
Genre
Tags: Male author
Recommended: 17 May 2018

The God of Small Things by Arundhati Roy EN

India
Description:
Still, to say that it all began when Sophie Mol came to Ayemenem is only one way of looking at it . . . It could be argued that it actually began thousands of years ago. Long before the Marxists came. Before the British took Malabar, before the Dutch Ascendancy, before Vasco da Gama arrived, before the Zamorin’s conquest of Calicut. Before Christianity arrived in a boat and seeped into Kerala like tea from a teabag. That it really began in the days when the Love Laws were made. The laws that lay down who should be loved, and how. And how much.
Genre Historical fiction
Tags: Set in INDIA Female author
Recommended: 06 Mar 2022

India
Description:
A REESE WITHERSPOON x HELLO SUNSHINE BOOK CLUB PICK "Eloquent and moving...Joshi masterfully balances a yearning for self-discovery with the need for familial love."--Publishers Weekly Vivid and compelling in its portrait of one woman's struggle for fulfillment in a society pivoting between the traditional and the modern, The Henna Artist opens a door into a world that is at once lush and fascinating, stark and cruel. Escaping from an abusive marriage, seventeen-year-old Lakshmi makes her way alone to the vibrant 1950s pink city of Jaipur. There she becomes the most highly requested henna arti... continue
Genre
Tags: Female author
Recommended: 10 Jun 2022

India
Description:
SOON TO BE A MAJOR MOTION PICTURE The stunning Booker Prize–winning novel from the author of Amnesty and Selection Day that critics have likened to Richard Wright’s Native Son, The White Tiger follows a darkly comic Bangalore driver through the poverty and corruption of modern India’s caste society. “This is the authentic voice of the Third World, like you've never heard it before” (John Burdett, Bangkok 8). The white tiger of this novel is Balram Halwai, a poor Indian villager whose great ambition leads him to the zenith of Indian business culture, the world of the Bangalore entrepreneur. On ... continue
Genre Mystery
Tags: Set in INDIA Male author
Recommended: 06 Mar 2022

We That Are Young by Preti Taneja EN

India
Description:
When a billionaire hotelier and political operator attempts to pit his three daughters against one another, a brutal struggle for primacy begins in this modern-day take on Shakespeare’s King Lear. Set in contemporary India, where rich men are gods while farmers starve and water is fast running out, We That Are Young is a story about power, status, and the love of a megalomaniac father. A searing exploration of human fallibility, Preti Taneja’s remarkable novel reveals the fragility of the human heart—and its inevitable breaking point.
Genre
Tags: Female author
Recommended: 27 Jan 2018

When I Hit You by Meena Kandasami EN

India
Description:
Seduced by politics and poetry, the unnamed narrator falls in love with a university professor and agrees to be his wife, but what for her is a contract of love is for him a contract of ownership. As he sets about reducing her to his idealized version of a kept woman, bullying her out of her life as an academic and writer in the process, she attempts to push back--a resistance he resolves to break with violence and rape. Smart, fierce, and courageous, When I Hit You is a dissection of what love meant, means, and will come to mean when trust is undermined by violence; a brilliant, throat-tighte... continue
Genre
Tags: Set in INDIA Female author
Recommended: 16 May 2022

FIND BOOKS FROM INDIA BY GENRE