Recommended books (6)
Travel the world without leaving your chair. The target of the Read Around The World Challenge is to read at least one book written by an author from each and every country in the world. All books that are listed here as part of the Read Around Asia Challenge were written by authors from indonesia. Find a great book for the next part of your reading journey around the world from this book list. The following popular books have been recommended so far.

Beauty Is a Wound by Eka Kurniawan EN

Dial a for Aunties by Jesse Q. Sutanto EN

Indonesia
Description:
"Sutanto brilliantly infuses comedy and culture into the unpredictable rom-com/murder mystery mashup as Meddy navigates familial duty, possible arrest and a groomzilla. I laughed out loud and you will too."--USA Today (four-star review) "A hilarious, heartfelt romp of a novel about--what else?--accidental murder and the bond of family. This book had me laughing aloud within its first five pages... Utterly clever, deeply funny, and altogether charming, this book is sure to be one of the best of the year!"--Emily Henry, New York Times bestselling author of Beach Read One of NPR's Best Books of 2... continue
Genre
Tags: Female author Male author
Recommended: 10 Jun 2022 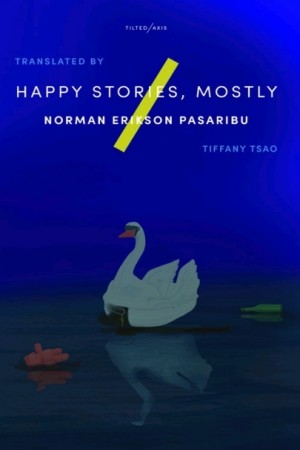 Indonesia
Description:
Playful, shape-shifting and emotionally charged, Happy Stories, Mostly is a collection of twelve stories that queer the norm. Inspired by Simone Weil’s concept of ‘decreation’, and often drawing on Batak and Christian cultural elements, these tales put queer characters in situations and plots conventionally filled by hetero characters.

The stories talk to each other, echo phrases and themes, and even shards of stories within other stories, passing between airports, stacks of men’s lifestyle magazines and memories of Toy Story 3, such that each one almost feels like a... continue

Like a Mighty Wind by Mel Tari, Cliff Dudley EN

Indonesia
Description:
Translated into dozens of languages, with millions of copies sold, Like a Mighty Wind remains a beloved classic from global evangelist Mel Tari. Recounting the incredible story of revival on the island of Timor during 1965 in the midst of political turmoil, the book is an amazing testament to the power of faith and the reality of God's power to work miracles in modern times.
Genre Biography Religious
Tags: Male author
Recommended: 21 Oct 2022

Indonesia
Description:
Winner of the 2016 Financial Times Emerging Voices Award, and longlisted for the 2016 Man Booker International Prize A wry, affecting tale set in a small town on the Indonesian coast, Man Tiger tells the story of two interlinked and tormented families and of Margio, a young man ordinary in all particulars except that he conceals within himself a supernatural female white tiger. The inequities and betrayals of family life coalesce around and torment this magical being. An explosive act of violence follows, and its mysterious cause is unraveled as events progress toward a heartbreaking revelatio... continue
Genre
Tags: Male author
Recommended: 28 Feb 2022

This Earth of Mankind by Pramoedya Ananta Toer EN

Indonesia
Description:
Minke is a young Javanese student of great intelligence and ambition. Living equally among the colonists and colonized of 19th-century Java, he battles against the confines of colonial strictures. It is his love for Annelies that enables him to find the strength to embrace his world.
Genre
Tags: Male author
Recommended: 27 Feb 2022

FIND BOOKS FROM INDONESIA BY GENRE

FIND BOOKS FROM INDONESIA BY LANGUAGE